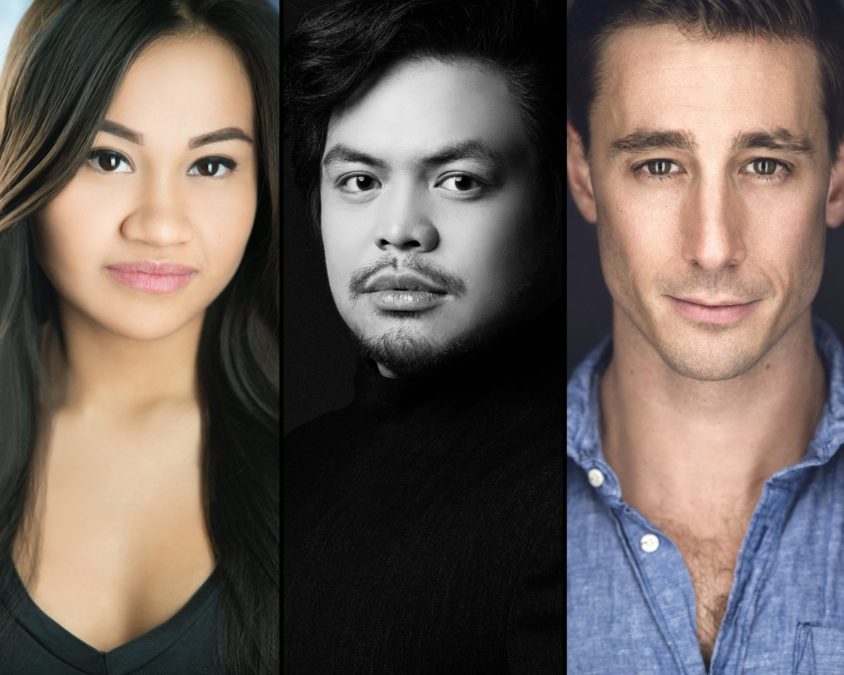 We're only telling you what we've received, but our reports can usually be believed! Emily Bautista, Red Concepción and Anthony Festa will star in the national tour of Miss Saigon as Kim, The Engineer and Chris, respectively. Directed by Laurence Connor (Broadway's School of Rock, Les Misérables), the traveling production of Miss Saigon will kick off on September 21 in Providence, RI, before continuing on to cities all across the country.

Bautista made her Broadway debut in the recent revival of Miss Saigon where she understudied and played the role of Kim. She was most recently seen as Éponine in the national tour of Les Misérables. Concepción is currently starring as The Engineer in the U.K. tour of Miss Saigon. His many stage credits in his native Philippines include Priscilla Queen of the Desert, West Side Story and Hairspray. Festa was most recently seen in The York Theatre Company production of Desperate Measures. His other stage credits include Wicked, Finding Neverland and West Side Story.

Joining Bautista, Concepción and Festa in the principal cast will be Stacie Bono as Ellen, J. Daughtry as John, Jinwoo Jung as Thuy and Christine Bunuan as Gigi. At certain performances, the role of Kim will be played by Myra Molloy. The role of Tam will be announced at a later date.

“It’s hard to believe that it has been over 27 years since Miss Saigon first opened in North America but, if anything, the tragic love story at the heart of the show has become even more relevant today with innocent people being torn apart by war all over the world,” said producer Cameron Mackintosh, in a statement. “This brilliant new production, directed by Laurence Connor and featuring the original dazzling choreography by Bob Avian, takes a grittier, more realistic approach that magnifies the power and epic sweep of Boublil and Schönberg’s tremendous score. Of all my productions, despite its popularity, Miss Saigon is the one that the public has had the least chance to see as it requires such a huge international cast of Asian and Western performers and a vast array of visually stunning sets. Now, for the first time in 17 years, as it continues to wow audiences in major cities around the world, theatergoers across America will be able to see one of the most spectacular musicals ever written in all its glory, in a new production that critics in London and on Broadway have embraced.”

Miss Saigon tells the story of a young Vietnamese woman named Kim, who is orphaned by war and forced to work in a bar run by a notorious character known as the Engineer. There she meets and falls in love with an American G.I. named Chris, but they are torn apart by the fall of Saigon. For three years, Kim goes on an epic journey of survival to find her way back to Chris, who has no idea he's fathered a son. This new production features stunning spectacle and a sensational cast of 42 performing the soaring score, including Broadway hits like “The Heat is On in Saigon,” “The Movie in My Mind,” “Last Night of the World” and “American Dream.”

Miss Saigon has music by Claude-Michel Schönberg, with lyrics by Richard Maltby Jr. and Alain Boublil, adapted from original French lyrics by Alain Boublil, with additional lyrics by Michael Mahler. The new production is directed by Laurence Connor with musical staging by Bob Avian and additional choreography by Geoffrey Garratt. Production design is by Totie Driver and Matt Kinley, based on an original concept by Adrian Vaux, costume design by Andreane Neofitou, lighting design by Bruno Poet, projections by Luke Halls, sound design by Mick Potter and orchestrations by William David Brohn. Music supervision is by Stephen Brooker and James Moore.

To find out when Miss Saigon is headed to your city, click here.