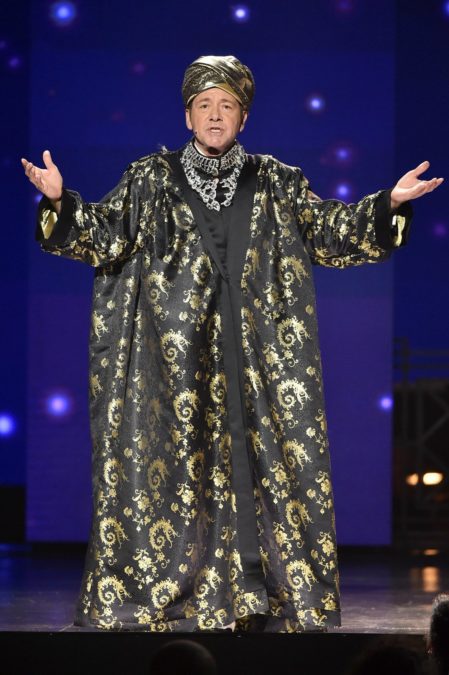 Belting! Making Out! Colbert as a Groundhog! Here’s the 2017 Tony Awards in 20 GIFs

What a night! The 2017 Tony Awards went down at Radio City Music Hall in New York City on June 11, and the performances, speeches and Kevin Spacey's hilarious hosting made for some highly GIF-able moments. From Great Comet drink slinging to touching speeches at the podium to audience members caught on camera, check out 20 moments from Broadway's biggest night that we won't soon forget.

Host Kevin Spacey opened the show with a hilarious nod to Dear Evan Hansen, which would go on to win the Best Musical Tony Award later on in the evening.

And Stephen Colbert made an epic entrance during the musical medley. Now we know who the Groundhog Day groundhog is, you guys!

And even though Kevin Spacey hasn't been on the Broadway stage in a decade, it was truly as if he never said, "Good-bye." Bonus: he served us some Norma Desmond realness.

And did you catch this hug between Dave Malloy and Josh Groban during The Great Comet performance? What dreams are made of!

There were lots of smooches too! Did you catch Grace McLean and Amber Gray making out during that number?

And the performances were all so epic! Look at Jenn Colella being all "Let's do this" during the Come From Away number.

The Falsettos performance was the most fun ever.

Josh Groban and The Great Comet cast threw the party of the year in under five minutes.

And the offstage moments are always one of the best parts of award shows. Can we talk about Falsettos Tony nominee Brandon Uranowitz's look to camera?

Or Rachel Bay Jones walking offstage with her Tony Award looking like an actual princess?

There were also a TON of highly quote-able speeches. Did you hear that Lincoln Center Theater's Artistic Director André Bishop said that we are in a Golden Age of America playwriting? We agree!

There was that iconic moment during Hello, Dolly! Tony winner Bette Midler's speech when she told the band to, erm, chill out.

Hamilton mastermind and Tony winner Lin-Manuel Miranda also returned to the Tony Awards stage and gave us so many feels when he announced the winner for Best Musical.

The President of the United States was also on the scene! Kevin Spacey and Robin Wright took the stage as their House of Cards characters Frank and Claire Underwood, and it was amazing!

And of course, the finale number was a major show-stopper. Spacey and LuPone on the mic? Patti's wish came true, and so did all of ours! Happy Tony Awards, everyone!